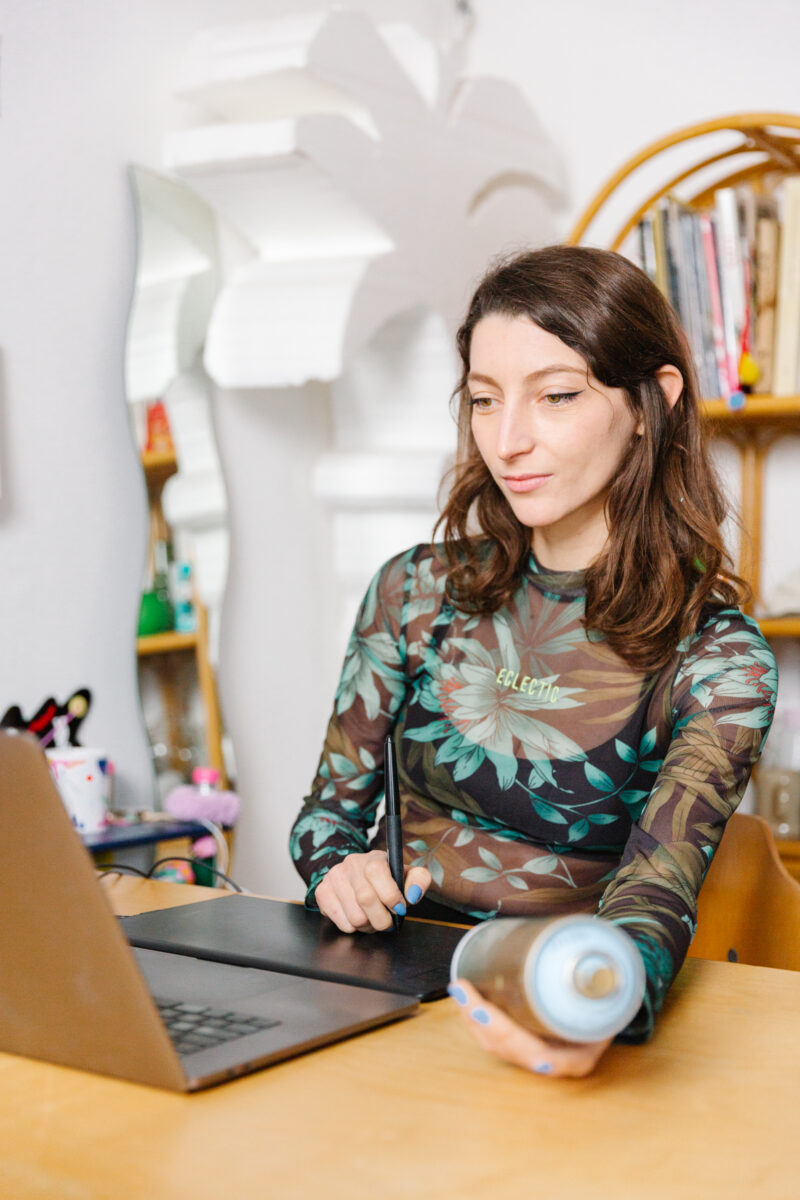 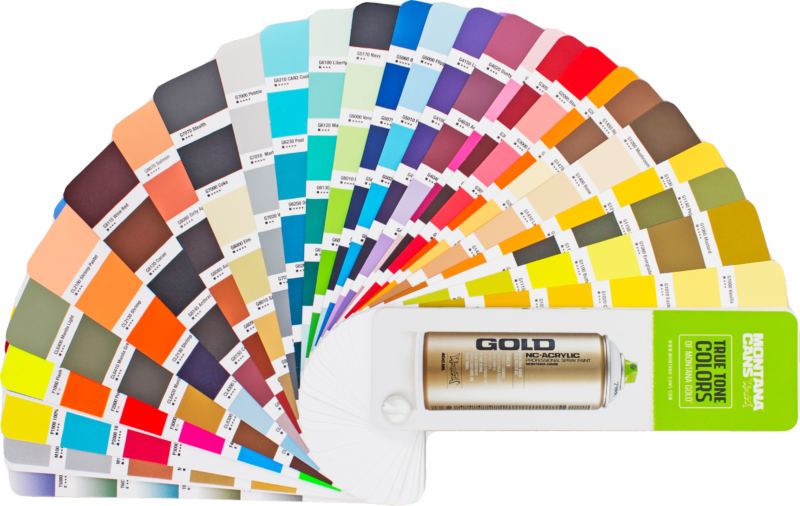 Allspraypainted meets Nadine Kolodziey. It’s funny to think that an email shifted over to the trash can in suspicion of it being “fake”, could have been the end of a monumental opportunity. Luckily for Nadine Kolodziey, the forgotten about email from YOUTUBE in the U.S was followed up weeks later by a surprise telephone call from them personally. They were trying to contact her regarding a book project for which they wanted her to design illustrations.

This, only a single element of the broad spectrum of artworks created by the classically trained German visual artist. Even so early on in her career, Nadine Kolodziey is more than just your average drawing addict. With her formative years taking place in the ’90s, Nadine has managed to merge her love of manga and Japanese culture generally, with other strengths she displays with ease like color use, collage, painting, digital art and augmented reality. 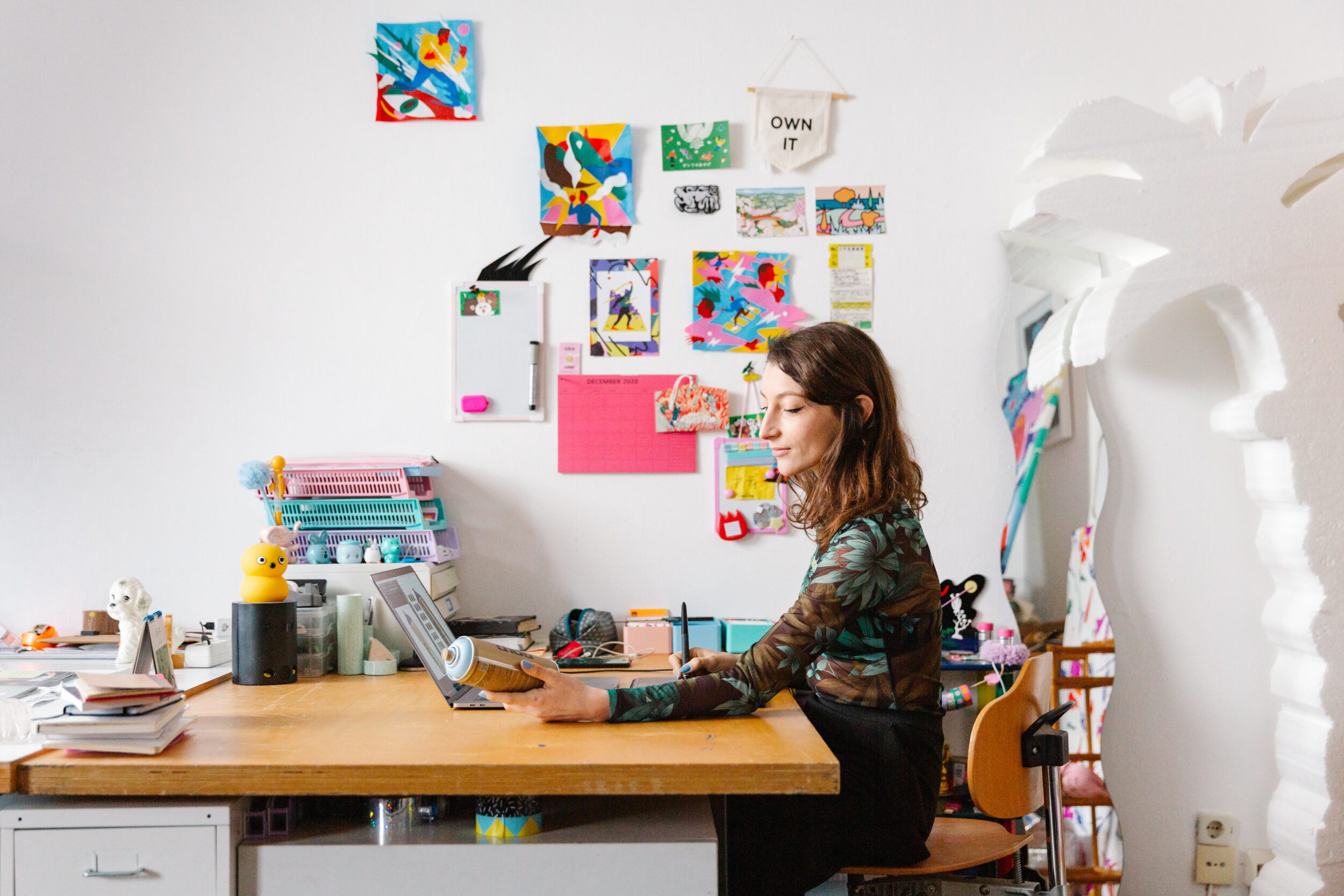 As a visual artist, Nadine alternates her workspace between the German cities of Frankfurt and Berlin. Also apt in many forms of artmaking by hand, it is the combination of her two homes that she turns to for inspiration. Her newfound love of augmented reality plays a huge role, too, when it comes to working while being on the go. The diversity of such progressive and creative cities only adds some extra edge to her already dynamic work. 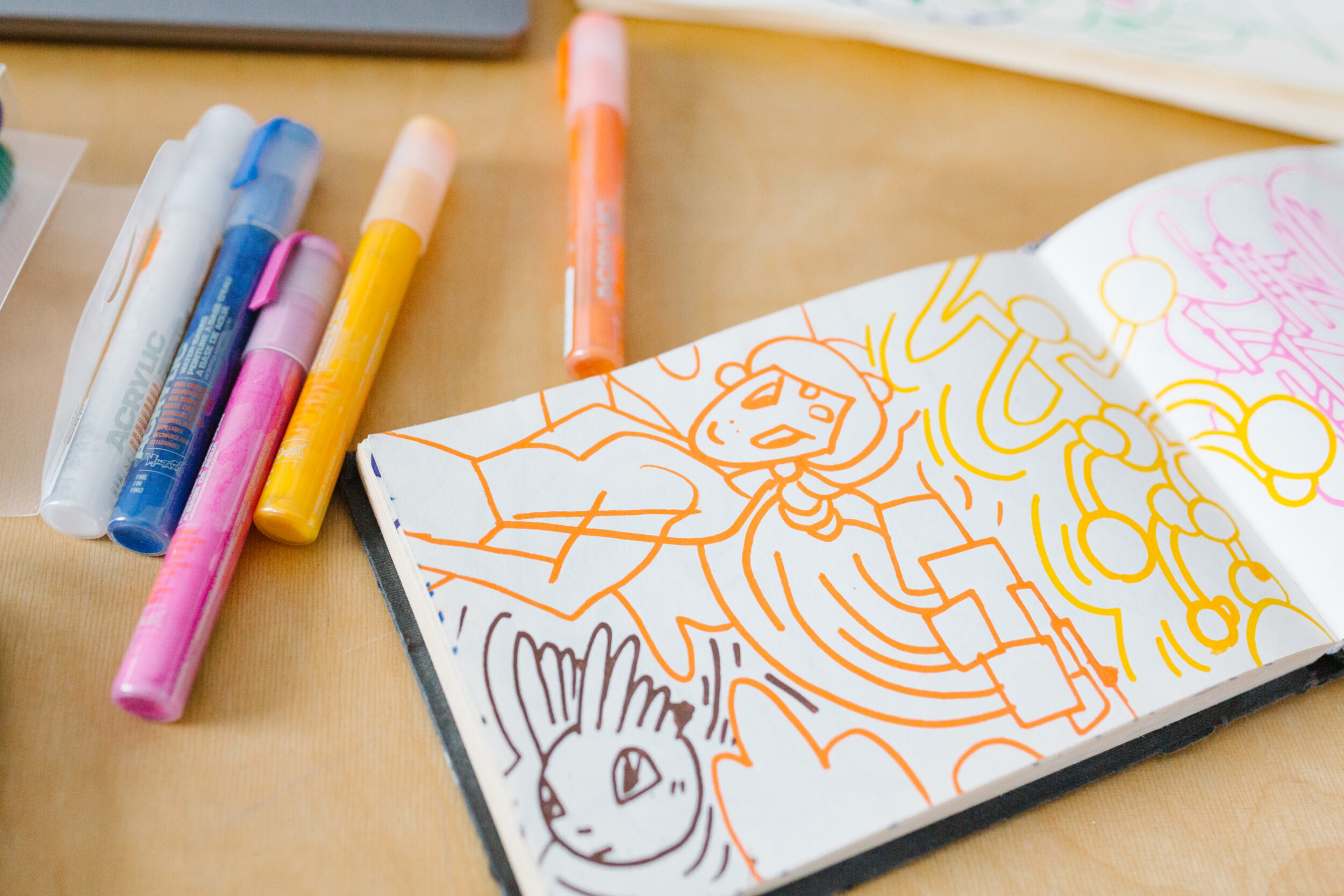 At the core of her artistic practice, Kolodziey likes to implement a motto that always keeps her moving forward. “Learn to unlearn”. With these three words, she offers herself the freedom to return to basics to re-discover what lies at the source of each idea. The love of mixing and matching means no doors are closed when Nadine Kolodziey creates. With a strong foundation in drawing, it is often a Montana ACRYLIC marker or design marker in hand, that starts the process from conception to execution of an artwork.

“Learn to unlearn”, keywords that guide her through the digital visual landscape, as she trailblazes with her own augmented reality app known as “Nadine Kolodziey” in app stores. As with most pixel pushers, Nadine Kolodziey is no exception to the notion that behind most digital artwork creators, there are talented craftspeople with manual skills. Skills that even translated into Kolodziey’s movement into spray paint works made with her favorite spray paint line, the Montana GOLD range. 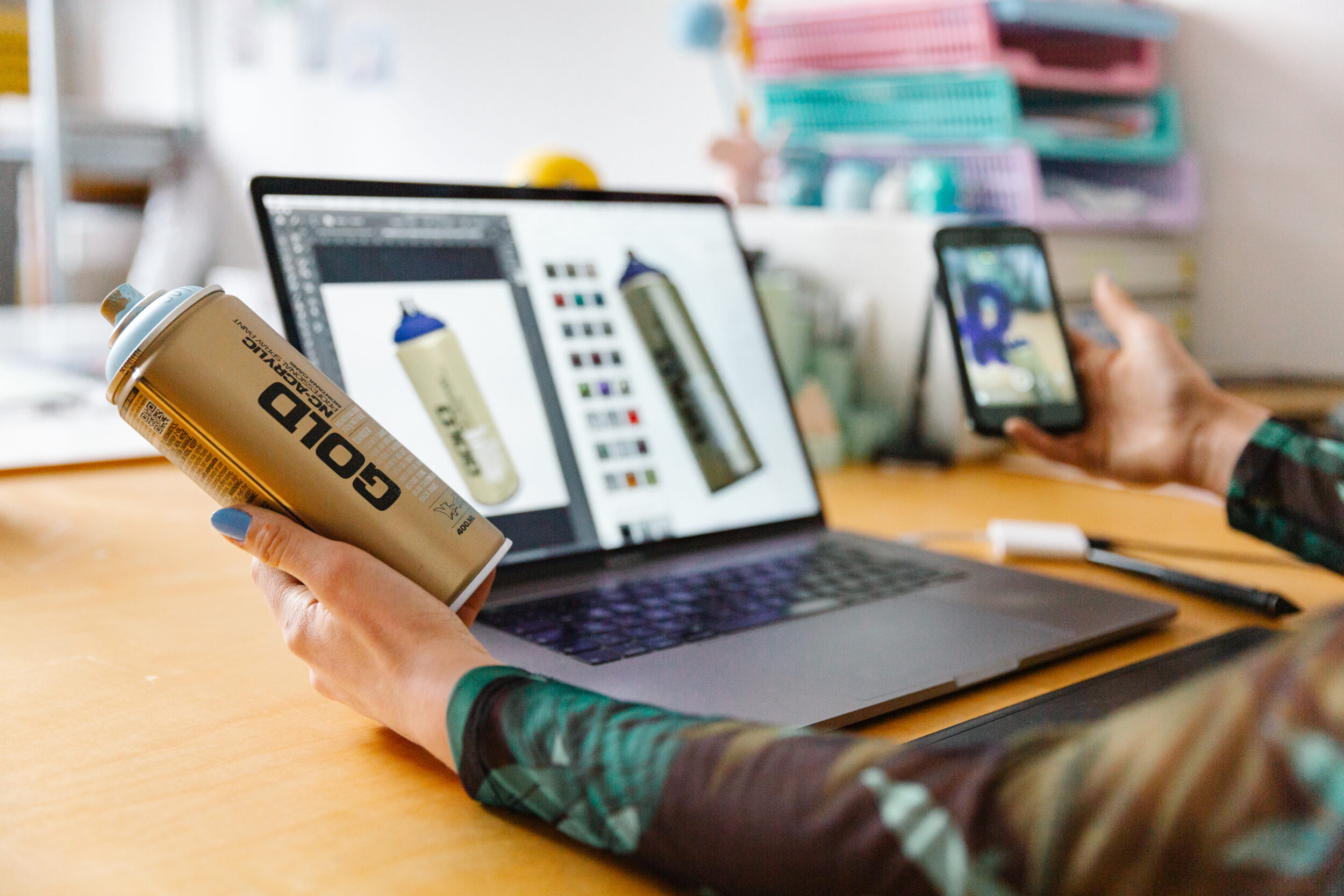 With a mystical effect that seems not completely graphically inspired, not quite painterly, Kolodziey also seamlessly applies her favorite Montana GOLD colors in her canvas works. Works that supply a location where opacity and transparency meet in a manner that is dynamic, colorful, and loud. Although the love of manga, toys, and Japanese cultural references are ever-present, it is no secret that European and Memphis design, are also morphed with Kolodziey’s own personality to keep the work traveling in its own unique direction.

Kolodziey’s yearning to invite the audience to interact with her artwork beyond its design or motif has not only led her onto the path of augmented reality, but her stylized 3D works in the form of sculptural installation also breathe life into her portfolio while integrating digital enhancement. The works take on a life of their own creating human experiences and thus memories. In a recent development within her augmented reality works, Kolodziey has developed the Augmented Reality Spray Can Filter in collaboration with allspraypainted. Just as in real life in her studios, this feature enables her use of the Montana GOLD cans to breach new horizons in a combination of static artwork, and real-time dynamic digital artwork. You, too, can try the filter on allspraypainted’s Instagram page! 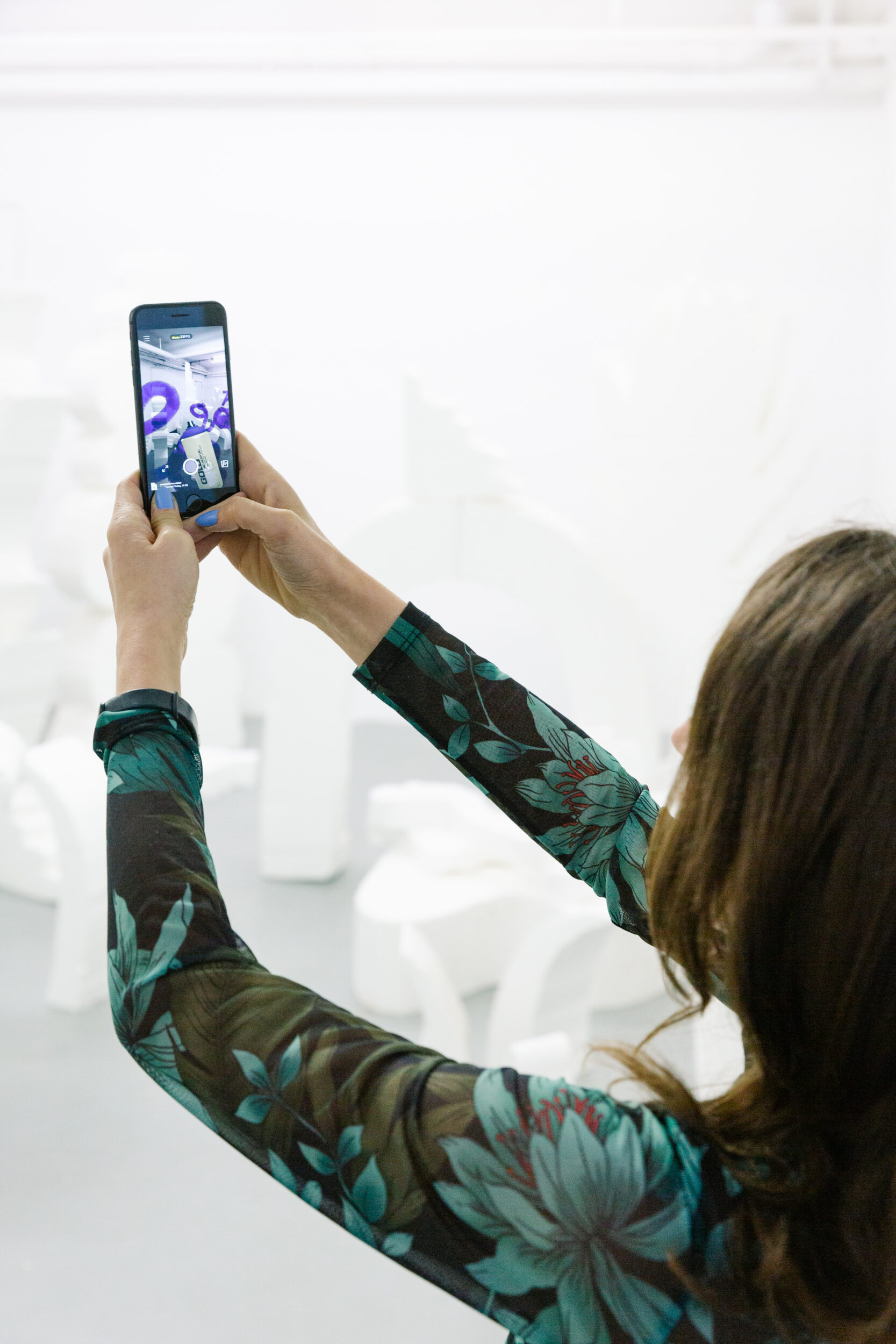 Without requiring a wall or a static substrate as a painting surface, the spray can filter enables users to create spray markings in thin air, within an installation context created by Kolodziey. This magical merge fulfills both her love of hands-on artmaking and her fascination for creating a world that is otherwise not there. With a background of white walls and life-sized white polystyrene objects, the welcomed digital splash of color is nothing less than captivating.

We look forward to the new horizons we are sure to see in the development of Nadine Kolodziey’s work, but until then, let’s enjoy what she has already achieved today. 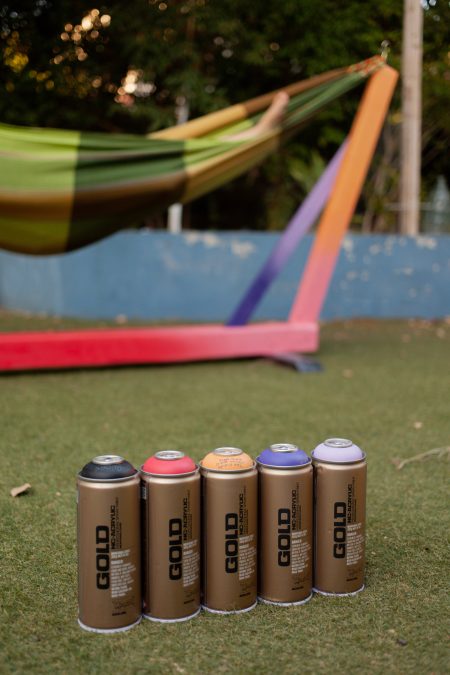 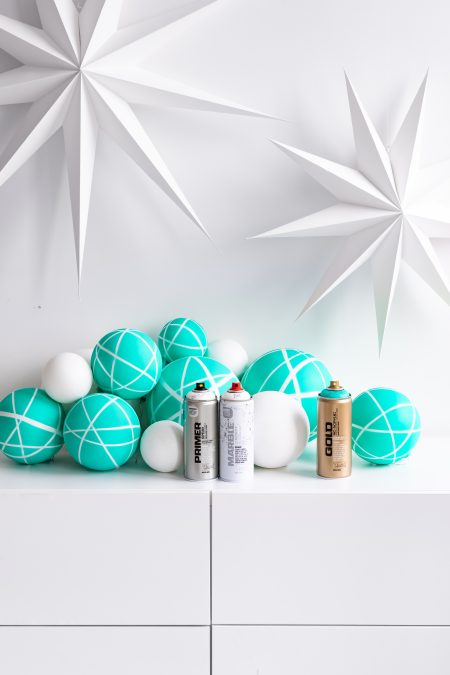 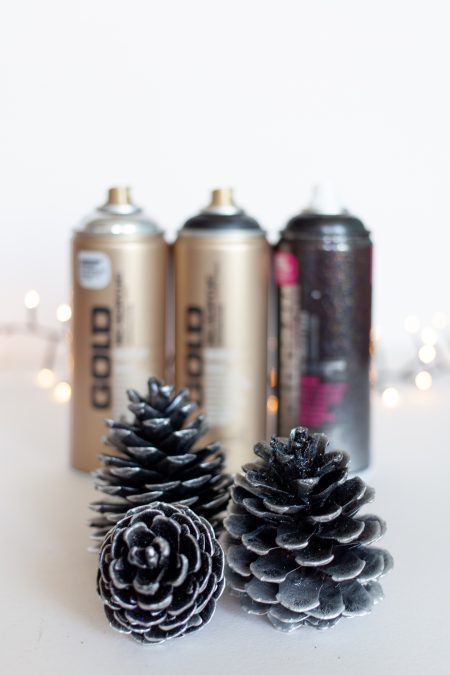 Check the link in bio to watch our #allspraypainte